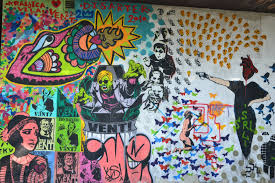 It may be called underground art, but with its growing popularity, it’s far from secret.

Art is considered “underground” when it is “outside or on the fringes of popular culture,” according to Tate, a British art institution.

Any art can be considered underground, from music to sculptures to graffiti. Often, these works are put on display at intimate festivals and exhibitions instead of large concerts and galleries.

Though underground art may seem like an uncommon form of expression, there is controversy as to whether it is beneficial to the arts. While some people find underground art unique, others find some cases inappropriate.

The internet has helped in “liberating alternative art forms and under-represented artists,” according to an article in The Guardian. But it makes it easier for people to find works they consider offensive.

“The problem for the underground is that while being only a click away can bring new audiences, it depends very much on who is doing the clicking,” The Guardian reported.

The internet makes it easier than ever to present underground works. Whether this means increased support or backlash all depends on if the person behind the screen likes the underground arts or doesn’t.

In Boonton, N.J., NTUR is a underground arts space for musicians, poets and more. According to USA Today, the business is “devoted to promoting independent, upcoming artists.” They focus on bringing all forms of expression together in one place.

The main reason artists choose the “underground” route over the traditional path is usually because of this intimacy within the spaces. This was true especially for the art gallery Luda in St. Petersburg in Russia.

“What differentiates Luda from others is its special feeling of community and liveliness. It feels closer to the spontaneous underground activities of 1990s St. Petersburg than to the city’s contemporary commercial galleries,” reported the Calvert Journal.

With more people choosing to pursue underground art, there are now gatherings all across the country for it.

Though some people see these events as mainstream with their growing popularity, they still cater to the new artists and the changing works that come with them. While formal galleries and showcases boast the works of the well-known, underground art events can feel less intimidating for emerging artists, according to the Charleston City Paper.

Locally, Asbury Underground provides a space for underground artists. Created in 2014, this event “brings musicians to the city’s art galleries,” according to the Inns of Ocean Grove. The most recent festival was held in January 2018. It featured over 100 artists, 50 performances and 20 locations for more than 10,000 people, as told by the Asbury Underground website.

“It was a very cool experience. You get to see all this unique art and hear all this great music. I’d recommend it to anyone looking for something different than a regular museum or concert.”

As the era of underground art continues to grow and flourish, will you dare to go underground?