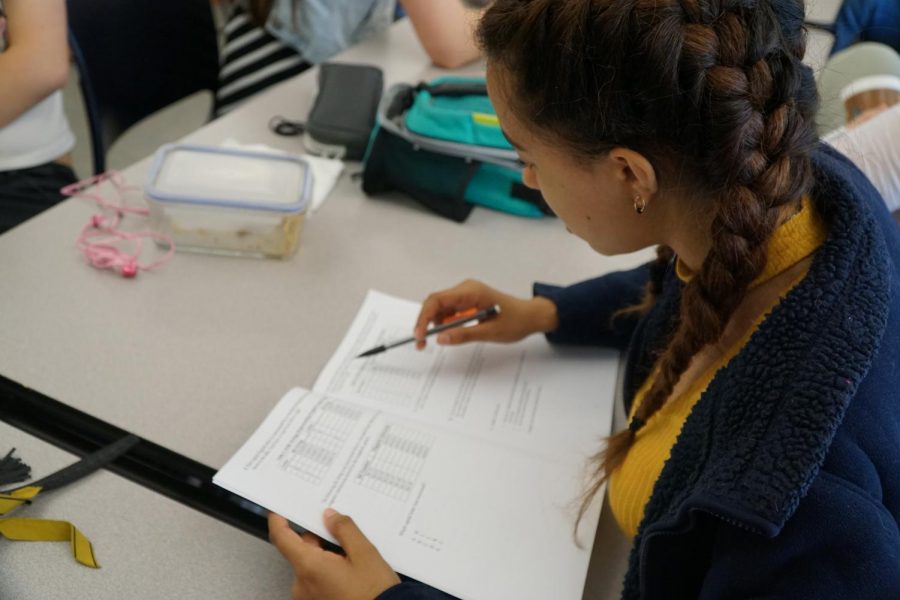 Junior Sydney Karlin of Matawan practices for the NJSLA-S Science Testing in the workbook provided by chemistry teacher Erin Wheeler.

The State of New Jersey released a field test for their new wave of testing that began this school year. The New Jersey Student Learning Assessment for Science (NJSLA – S) is based on the New Jersey science curriculum that has been in action since 2014. This standardized science testing replaced the biology test that was taken by freshmen around the state.

A window from May 7 to June 8 was the time allotted by the state for the exam to be completed. The CHS guidance department worked closely with Principal James Gleason to formulate a testing schedule. Testing was eventually scheduled for May 23 and 24. In order to combat students missing too much class time, the first two units of testing were during the first half of the day while the second two units were during the second half of the day.

The purpose of this year’s test was to field test questions with a real audience.

“If a test question has poor statistical results according to the NJ Department of Education it will be eliminated from the calculations of student proficiency and future tests,” guidance counselor Sandra Gidos said.

Although not thrilled with the idea of more standardized testing, the Class of 2019 tried to put their best foot forward during the test.

Junior Liam Marshall of Sea Girt said that even though junior year is very heavy with testing, he should try his best because it reflects on CHS.

“I tried my best because I know this can affect our ranking and how CHS is viewed as a school so I really read each question and put thought into my answers,” Marshall said.

Gidos said she was thankful that both CHS students and faculty were so accommodating with all of the testing occurring recently.

“I appreciate all the time and the patience both students and teachers have endured for both PARCC and NJSLA-S testing,” Gidos said.