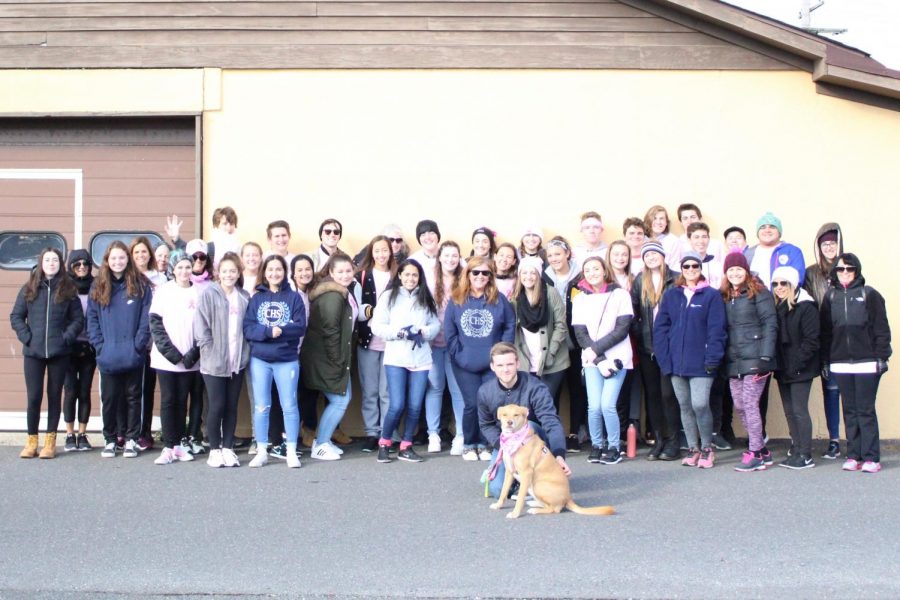 Senior and NHS President Jules Andersen of Howell suggested holding a walk to benefit breast cancer at a council meeting last June. This year, after getting approval from the SGA, NHS adviser and math teacher Justine Lane told the council that CHS previously participated in the Point Pleasant event, which was a better option than an outdoor lunchtime walk.

“Since coming to CHS, I haven’t been super close to my home high school. One of the things that they always do is celebrate Breast Cancer Awareness Month during football games,” Andersen said. “This was something that I wanted to be a part of and I thought a good way to bring that to CHS was to hold an event celebrating Breast Cancer Awareness Month, the same way football does [at other schools].”

Lane created a team on the Making Strides website and sent the link out to the entire school. NHS also invited family and friends from other schools to join the CHS team and donate.

By Oct. 21, 45 people had signed up to participate in the walk with CHS, including junior Zach Weisenstein of Freehold.

“My favorite part of the event was seeing the amount of people that showed up to support the cause,”  Weisenstein said. “It was really cool to see the community come together to help the cause against cancer.”

CHS alumna Amanda Piazza first introduced CHS to the walk. She participated in this year’s event with her own team and met up with Lane afterwards.

Lane introduced Piazza to Andersen, as well as other CHS participants.

“Meeting Amanda was really cool because it showed just how impactful you can be. She was just like the rest of us, she came from the same place and was walking alongside everyone else. She’s done it for years, and it’s really cool to see that she came from my high school,” Andersen said.

Andersen said she hopes the walk will become a tradition once again.

“I didn’t bring up the idea for it to only be this year, this is something that I hope continues for years to come, even after I graduate,” Andersen said. “I hope that some of the juniors and underclassmen who walked with us see how amazing this whole opportunity was and use that to keep it going in the future.”