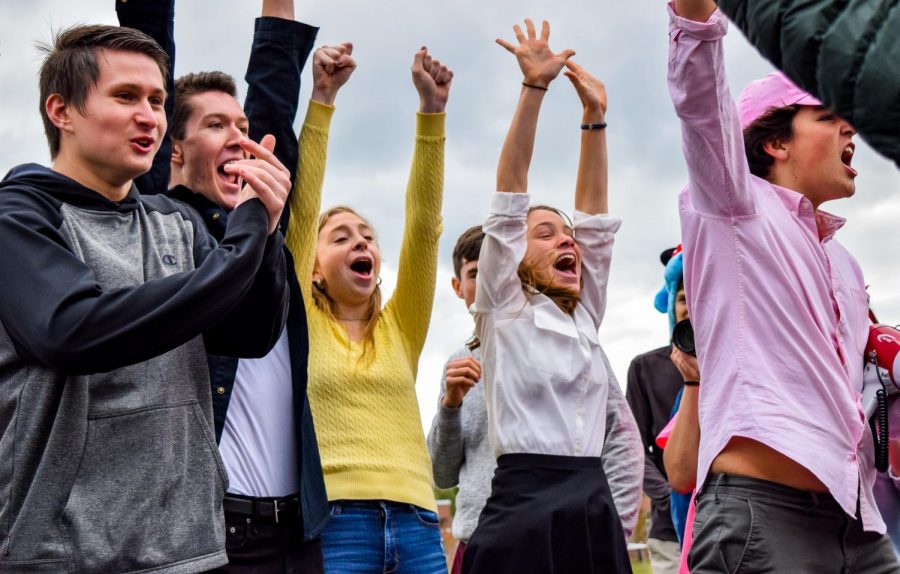 Seniors, from left, Michael Topper of Ocean, Will Dean of Middletown, Greer Shanley of Fair Haven, Erica Sammarco of Colts Neck and Liam Marshall of Sea Girt rejoice as the Class of 2019 wins the Relay event during lunch on Monday, Oct. 29.

Students kicked off Fall Spirit Week 2018 on Monday Oct. 29 with Character Day and the lunchtime Relay.

For Character Day, students had to “dress up as any character from a movie, tv show, cartoon, or anything else really,” said senior and SGA Vice President Emma Hecht of Wall. “As long as you could explain it to a teacher, you counted.”

SGA released the scavenger hunt list for Monday at 10:30. Students scoured the school for double sided tape, three pairs of white socks, and a pink scarf among other items. The sophomores placed first. The juniors placed second. The seniors came in third, and the freshman finished fourth.

The Relay event started at 11:00 and occurred outside. This is unusual for spirit week competitions, but several events in the Relay were not practical for indoors. Teams had to find chopsticks in a bucket of hay and bob for apples. Senior Sebrina Gao of Freehold, who has competed in two spirit week relays beforehand, sealed the win for the Class of 2019 by finding chopsticks in a bucket of hay. The seniors won with the juniors in second, sophomores in third, and freshman finishing last.

CHS Spirit Week annually consists of themed dress up days and competitions during the lunch and activity period between grades for points. This year’s SGA removed Penny Wars, a CHS tradition, from Fall Spirit Week because they did not feel it was necessary after a lot of fundraising from last year according to senior and SGA President Liam Marshall of Sea Girt.

At the end of the day, the seniors held first with 50 points, followed closely by the sophomores and juniors tied with 48 points, and the freshmen in last with 30 points. Spirit Week continues tomorrow with Pajama Day and Pumpkin Decorating.