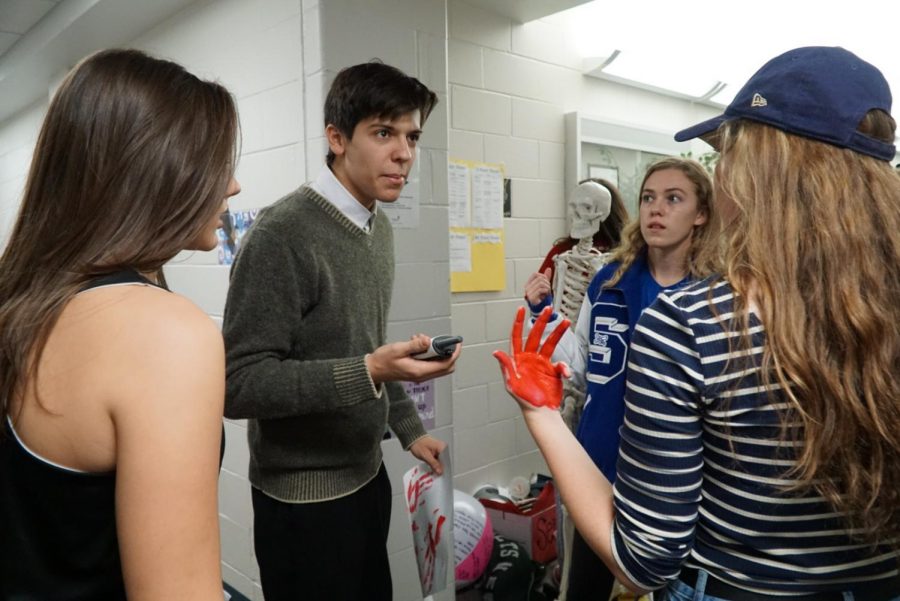 Junior and SGA council member Dane Tedder of Ocean talks to members of the senior class about items they collected for Super Scav.

Fall Spirit Week came to a close on Friday, Nov. 2 with the seniors securing their first Spirit Week win with 375 points. The juniors followed closely with 358 points, the sophomores came in third with 313 points and the freshmen rounded out with 259 points.

Friday’s theme was High School Stereotypes Day, leaving the hallway flooded with nerds, jocks and every cliché in between.

The lunchtime event, Super Scav, made its Spirit Week debut and replaced Penny Wars as the most point-heavy event of the week.

Super Scav started at 10:45 and lasted a half hour. It ended with the seniors and juniors tying for first place, and the sophomores and freshmen following in third and fourth place, respectively.

Junior council member Mary Eknoian of Wall said that as part of their approach, members of her grade signed up to cover different locations around the school to collect the items that would be there.

“We prepared by having certain individuals sign up to cover the ground at specific locations,” Eknoian said. “We also brainstormed potential items and assigned certain people to complete the riddles.”

Students rummaged through lockers, backpacks and classrooms to obtain all of the items on the list. There were one, three and five-point Items which included eight Rook coffee cups, a frying pan and a printed copy of the Pledge of Allegiance translated into 10 different languages. There was also a 40 point riddle that all grades had to solve.

Some grades strategized and came prepared, dragging in duffel bags full of random items from their homes.

Senior class secretary Rebecca Rippon of Ocean said that the seniors spent the whole day prior planning in a group chat with half of the class on what items to bring.

“I think we ended up sending a thousand texts just in one night. It was totally worth it though because we worked out a really great plan to divide and conquer to get as many items as possible,” Rippon said.

The sophomore class had a similar strategy to the juniors and seniors. They created a Google Doc where classmates signed up to bring items from past scavenger hunt lists and made sure that items were not repeated.

Sophomore Francesca McCaffrey of Long Branch said she favored Super Scav over Penny Wars and enjoyed the nature of the competition.

“I thought it was a lot more fun and intense than Penny Wars. The only thing that was hard was staying organized and making sure we all weren’t going after the same items,” McCaffrey said.

SGA President Liam Marshall of Sea Girt said he was happy with how the first Super Scav turned out.

“It was a beautiful combination of chaos and fun. Penny Wars needed a more active alternative, and I think it was a good decision to make the change,” Marshall said.