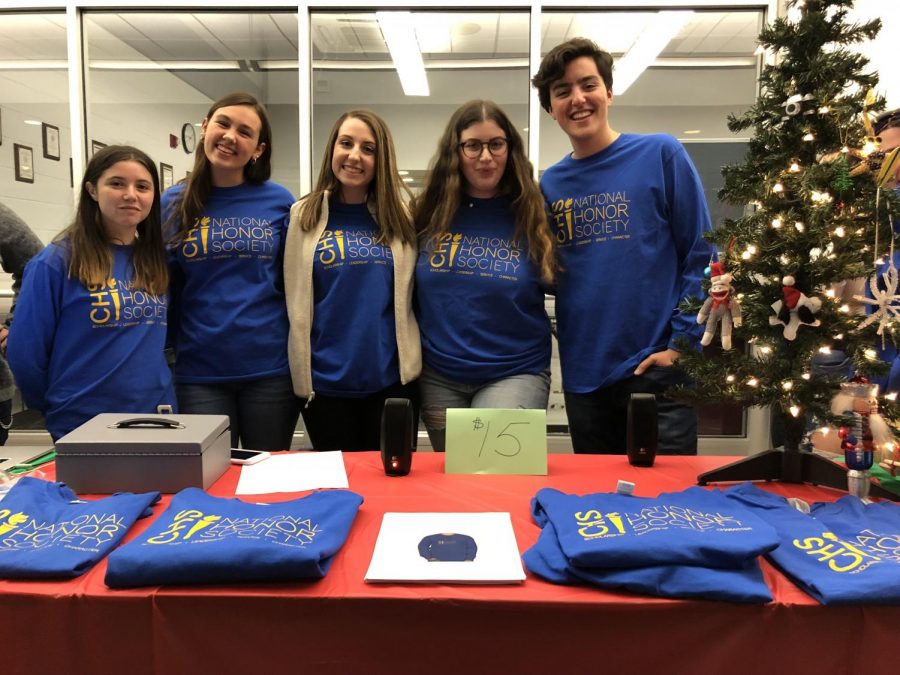 Hosted by the Parent Student Faculty Association (PSFA), the event provides clubs with a fundraising opportunity while getting students and their families into the holiday spirit. Clubs such as Radio, National Honor Society, National Art Honor Society, CCC, JSA, Photo Club, LitMag and SkillsUSA took part.

However, many councils did not raise as much as anticipated. Junior and JSA co-president Vaughn Battista of Tinton Falls said that JSA expected to profit more from the event.

“Speaking on a personal note, we had a lot riding on Mingle & Jingle, and it didn’t really work out well for us,” Battista said. “We didn’t make even half as much as we wanted to, so we have to turn to new forms of fundraising.”

Along with clubs, class councils, such as the Class of 2020, participated. The Class of 2020 sold holiday cards, created by council member Emily Madeira, and also ran a raffle for attendees.

“No club really raised a lot of money… we did break even, but we didn’t make that much profit,” said junior and Class of 2020 vice president Colin Martin of Middletown.

Though some clubs had difficulty fundraising, others benefited from the event. The PSFA accommodated for the Drama Club, said director and senior Summer Ward of Oceanport.

“PSFA was really flexible and let us use the cafeteria to rehearse the night of Mingle and Jingle. This was super helpful because it was the night before the show, and we really needed the stage. PSFA also donated their extra concessions from the event to us to sell at our show the next day, which was so generous of them. We’re so thankful for that,” Ward said.

Senior and Photo Club president Alyssa Rasp of Hazlet said that the Photo Club did not struggle to raise money, and also was benefited greatly by Mingle & Jingle.

“We profited a lot, which is good for our first year,” Rasp said. “We also sold some new things this year, like cards and mugs, along with our prints. We got there early to get a good table, and we set up a mini gallery in the locker pods with the photo club members, and people seemed to really like it.”

To end the event, Chorus performed holiday songs such as “Walkin’ In a Winter Wonderland” and “Jingle Bell Rock.”

“We didn’t have much time to prepare, but we still pulled it off. We all sounded great, and I was really proud of how well everyone did,” said senior and co-president of Chorus Rebecca Rippon of Ocean.

Regardless of unexpected fundraising issues, Mingle & Jingle helped represent clubs, provide fun for families and allow the PSFA to give back to CHS.