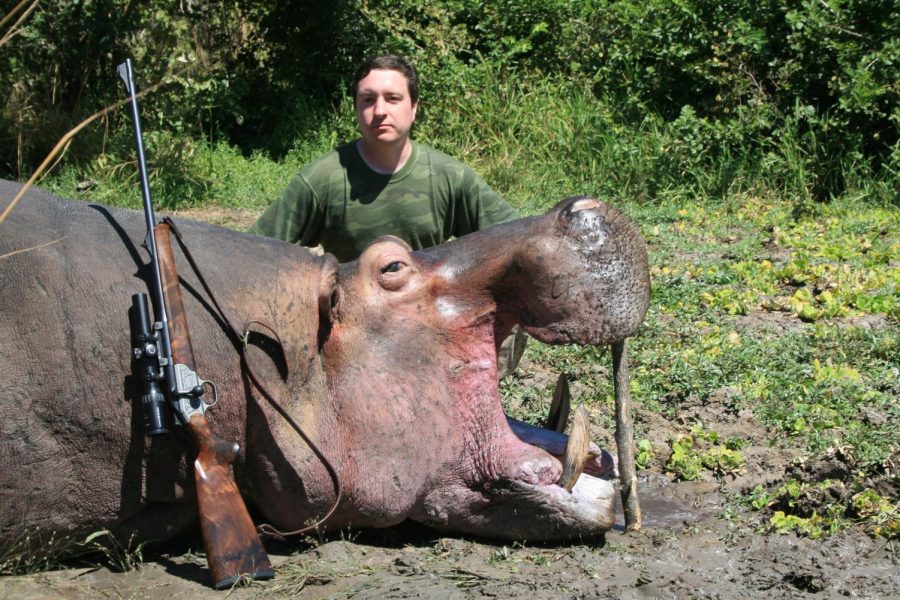 A trophy hunter poses with a hippopotamus prize. https://creativecommons.org/licenses/by/2.0/

Trophy hunters destroy the nature of Africa. They whistle the tune “Hakuna Matata” from “The Lion King” and claim “no worries for the rest of your days” by donating insignificant amounts of money to protect wildlife. But, when the media is not looking, they hang Simba proudly in their office and wipe their shoes on their Mufasa rugs.

Many consider hunting an American sport, making it an activity that few would be willing to surrender. In their eyes, it means heading into the woods and getting their hands dirty in the only way Americans know how: by walking into territory that is not theirs and killing its innocent inhabitants.

The sport is a facet of American history. In 1902, former President Theodore Roosevelt spared the life of an old black bear during a hunting trip in Mississippi and became the face of hunters nationally. Praised for his sensitivity, Roosevelt carried the legacy of a savior and later served as the inspiration for the teddy bear, according to the National Park Service.

But history textbooks rarely mention that Roosevelt slaughtered 296 native animals during the Smithsonian–Roosevelt African Expedition, misleading readers with a glorified story. By doing so, Roosevelt set the dangerous precedent of trophy hunting in America.

Unlike normal hunters, who aim to obtain meat, trophy hunters have the sole intention of murdering animals to sell or collect valuable parts such as the horns, organs, tusks or skin.

15,000 American trophy hunters visit Africa each year with the hopes of killing and displaying animals, according to the Humane Society of the United States. During a decade-long study, the Humane Society found that American trophy hunters imported nearly 32,500 trophies of the Africa Big Five species, which includes lions, elephants, leopards, buffalo and the endangered southern rhinos.

The rhino population dropped by 98 percent to less than 2,500 rhinos between 1960 and 1995, according to the World Wide Fund for Nature, but hunters continue to target them for their monetary value. Trophy hunters willing to pay $200 million for big game justify their decisions by claiming to be philanthropists and donating a percentage of their money to conservation efforts, according to the International Fund for Animal Warfare (IFAW).

Though these hunters insist that they make attempts to save the steadily declining population of rhinos in Africa, IFAW found that only 3 percent of the donations go to local communities, rendering it almost negligible.

If trophy hunting continues, “The Lion King” will no longer hold relevance for future generations. Young children will watch the movie and wonder what happened to all of their beloved characters, confused as to why they can no longer see African lions anywhere but on the big screen. When that day comes, hunters will have no choice but to look those children in the eyes and explain that they broke the circle of life with their bullets.