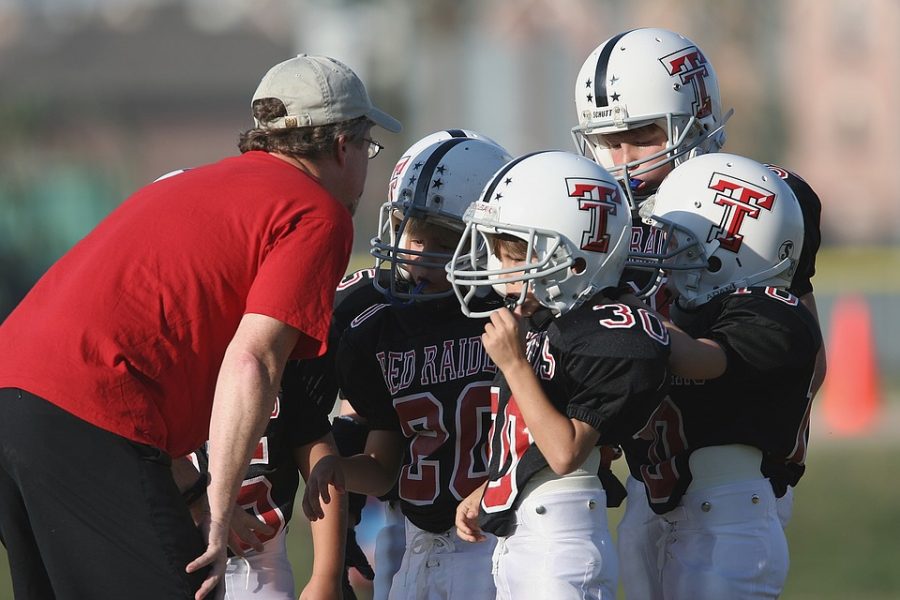 At a Houston high school football game, a coach talks to his team. https://creativecommons.org/licenses/by/2.0/

The camaraderie of a team. Cheers and adoration from the entire school. Scholarships that could cover college tuition. The reasons to play football in high school are greater than just the love of the sport.

Still, the risk of chronic traumatic encephalopathy (CTE) adds up to something that no scholarship can cover. According to NBC News, CTE causes depression, rage and memory loss. Doctors can not determine CTE until after death, but out of 111 donated brains from NFL football players, 110 suffered from it from it.

NBC describes CTE as “a degenerative disease in which protein forms clumps throughout the brain, killing brain cells.” Traumatic brain injuries, such as concussions and blows to the head, can cause CTE. These blows do not have to be high impact, and symptoms usually do not appear until years after.

The NFL only acknowledged CTE in football players in 2016, after denying the connection for years, according to NBC. Its response was to implement a new helmet rule with confusing guidelines that critics attacked.

“It’s really hard to change the way you’ve been playing after 20 years,” Cowboys safety Jeff Heath said. “You’re not always thinking about where you’re hitting somebody… As soon as you start thinking, and second-guessing yourself, I think that’s when trouble happens.”

“It makes sense that children whose brains are rapidly developing should not be hitting their heads over and over again,” Dr. Robert Stern, the co-author of this study, said.

Despite this, the National Alliance for Youth Sports states that children football are ready to play football as early as the age of 5. Instead of focusing on heavier NFL regulations, organizations like this should reevaluate the age at which players should start. This way, we may be able to keep the perks that come along with football – parties, cheers, and scholarships – just without CTE.