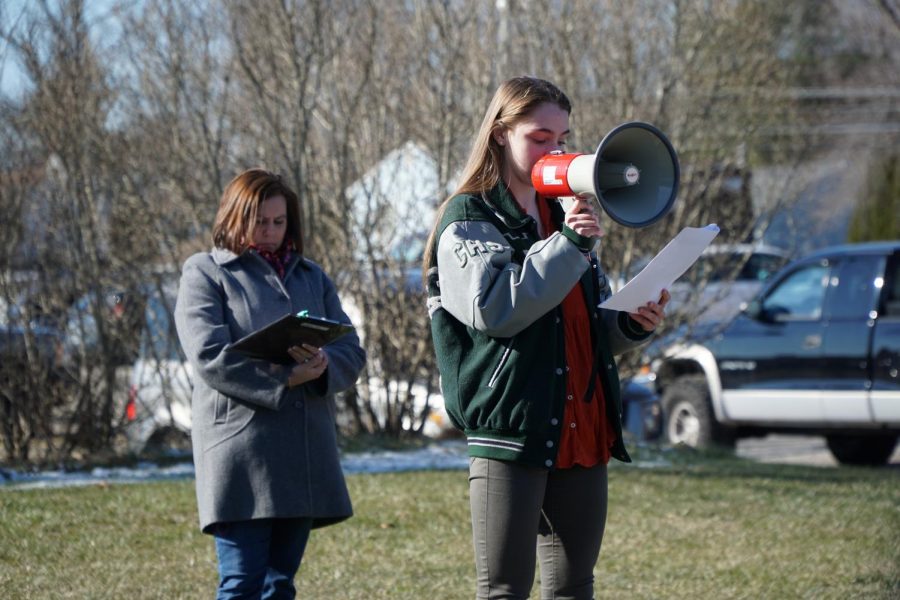 Senior Erica Sammarco of Colts Neck speaks at the 2018 Walkout in honor of those killed during the Parkland shooting.

The students in Justine Lane’s AP Calculus class sprung from their seats and huddled together on Friday, Feb. 1. With the lights out and the door locked, they sat in complete silence. No one mouthed words to friends sitting across from them or fiddled with their fingers playing Chopsticks. They sat in silence and waited for administration to unlock the door and assure that it was only a drill.

Students appear to be taking these security drills more seriously, and the district is matching the effort with financial backing. The Monmouth County Vocational School District (MCVSD) has invested more than $100,000 in security measures within the past few years, said Assistant Superintendent Dr. Charles Ford.

“We will continue to do numbers like that because we have things that we want to do to keep moving forward,” Ford said.

Although administration asked to keep many specifics classified for security purposes, MCVSD is working to ensure the safety of its students.

The district has also reached out to the state police for additional suggestions and perspectives on tightening security. Ford advised students to be aware of their surroundings and actively participate in maintaining their own safety.

“You can put the best and brightest devices in place, it’s not as good as the eyes in the building,” Ford said.

This procedure raised issues of convenience among students, including sophomore Jacynth Apora of Manalapan.

“Say someone went to the bathroom and we had an emergency lockdown, then they would be locked out and technically no one in the class could go and open it for them because we would be in a lockdown,” Apora said. “That’s scary because either way it feels like it’s more dangerous for people who are not in a classroom at that time.”

Seniors Merina Spaltro of Allentown and Vivian DeRosa of Ocean said they noticed a rise in the intensity of drills throughout their high school experiences.

“I definitely think it has gotten more strict,” Spaltro said. “There wasn’t really much in place at all except for the mandatory safety things, but there have been big changes in the past few months … it’s a lot more obvious that there is security now.”

DeRosa agreed with Spaltro and said that CHS is limited logistically when it comes to security.

“I think the school has taken some really strong steps to do what they can, and I like that there are not any restrictions that are impeding on my education in any way,” DeRosa said.