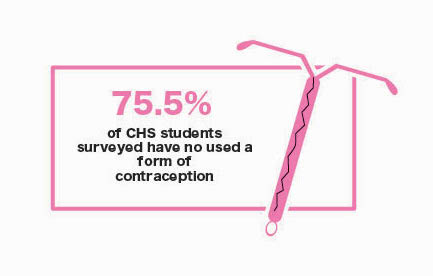 Talking about contraceptives is the elephant in the room for most teenagers. But for a conservation on so many young adults’ minds, it surprisingly never takes place. When teenagers need advice from adults regarding birth control, many avoid bringing up the topic themselves out of shame, embarrassment or discomfort.

As a result, a multitude of students have become reliant on their school health programs to educate them on sex. Though select schools still use abstinence-only curriculums, many teachers now emphasize the benefits that come from using contraceptives. And unlike some subjects in school, safe sex is something students will use repeatedly in their adult life. With the addition of contraception to the curriculum, around 90 percent of teenagers used a form of birth control during the last time they had sex,  according to the Centers for Disease Control and Prevention (CDC).

Specifically, 97 percent of teenage girls use condoms during intercourse, according to Planned Parenthood. Other popular methods among teenagers include withdrawal at 60 percent and birth control medication, or “the Pill” at 56 percent.

Even though these methods are widely used among students, they are not the most effective way of preventing pregnancy. According to the CDC, intrauterine devices (IUDs) are actually the most efficient types of reversible birth control, with a failure rate of only 0.8 percent.

But, when it comes to CHS students, contraceptive use tends to fall under medical issues unrelated to sexual health.

Some students use popular forms of contraception like “the Pill” for personal health reasons. A female junior said she takes birth control to regulate her period.

“I’ve taken it for a couple of years now, and it’s been really helpful when it comes to the pain of period cramps,” she said. She went on to explain that her purpose for being on birth control was not related to her sexual health.

According to a survey of 106 CHS students, only 24.5 percent have used a form of contraception. Despite this lack of contraceptive use for sexual purposes, sophomore health at CHS continues to educate students how to practice safe sex.

“Mrs. Gomez and I agree that presenting teenagers with all of the options, the pros and cons, along with frank discussion about sex, consent, and consequences is the best way to help teenagers make responsible decisions,” said Morgan. “We remember being teenagers and that abstinence isn’t always what is going to be chosen and if teenagers are going to have sex they should know about all of the options they have to choose from.”

In the U.S., both regular doctor’s offices and health centers can provide teenagers with birth control with or without their parents’ permission, according to Planned Parenthood.

“Getting the pill was really simple. I just went to my regular visit to the gynecologist, and she gave me a prescription,” the junior girl said.

No matter the form of contraception or the reason for its use, birth control plays an important role in the lives of many teenagers.