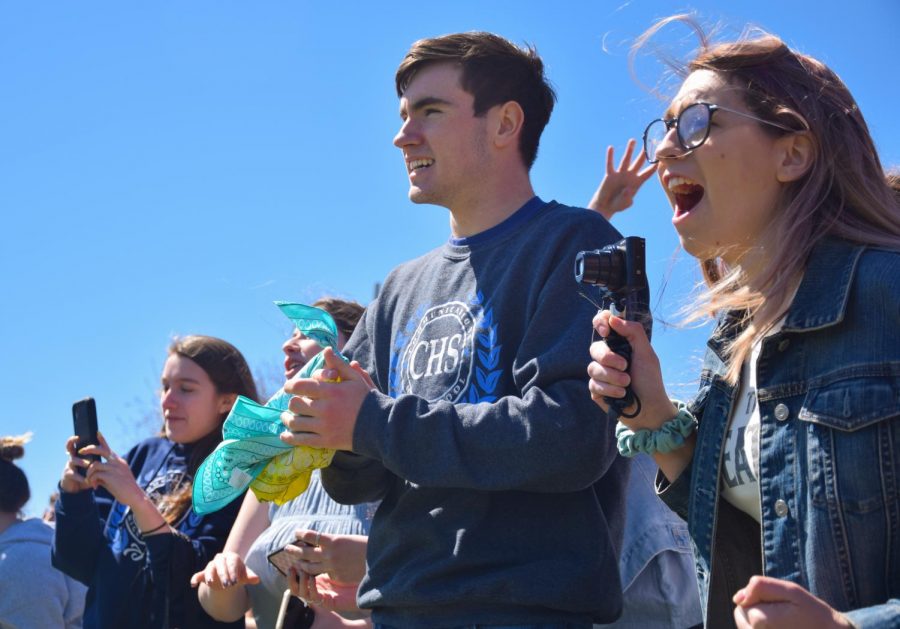 Spring Spirit Week continued on Tuesday, April 16 and left CHS seeing double as the daily theme was Twin Day. All four grades checked in with their respective SGA members to be counted for participation from 10:30 to 11:00 during lunch.

The cumulative Scavenger Hunt proceeded with items ranging from 500 white cotton swabs to one box of uncooked spaghetti. Items obtained by Tuesday at 10:45 were counted for five points each. Items that were not collected on Tuesday can be brought in on Wednesday for three points each or Thursday for one point each. This is the first time that grades have been able to bring in missing items for points.

The lunchtime event was the Spring Relay and it was held outside. The event consisted of four different challenges. The first one was a bunny hop race where two people had to tie their arms to their ankles and hop around a cone. The next part of the relay was a ring toss to a person with bunny ears, where you had five rings to land around the ears of your partner. The next contest was a wheelbarrow race where the person who was the “wheelbarrow” had to push an Easter egg from the start to finish and back using only their face. The final competition was a blindfolded Easter egg hunt. The seniors came in first place with the juniors, sophomores, and freshman claiming second, third, and fourth place respectively.

Senior Kiera Gill of Wall participated in the Spring Relay. She thought it was a fun event that was surprisingly harder than she expected.

“I thought the events were really fun, some of them were wild and especially with the wind it became difficult,” Gill said. “In the ring toss, the wind would blow the rings all over the place, and in the wheelbarrow one, the egg was moving with the wind because it is so light.”

The scores at the end of the day were the seniors leading with 132 points, juniors tailing with 122 points, then the freshman with 114 points, and finally, the sophomores closely behind with 110 points.

Spirit Week will continue on Wednesday where the daily theme is Decades Day. The seniors were assigned the 2000s, the juniors have the 1990s, the sophomores have the 1970s, and the freshmen have the 1980s. The lunchtime event is Hungry, Hungry Hippos, a new Spirit Week event. The daily Scavenger Hunt will continue.