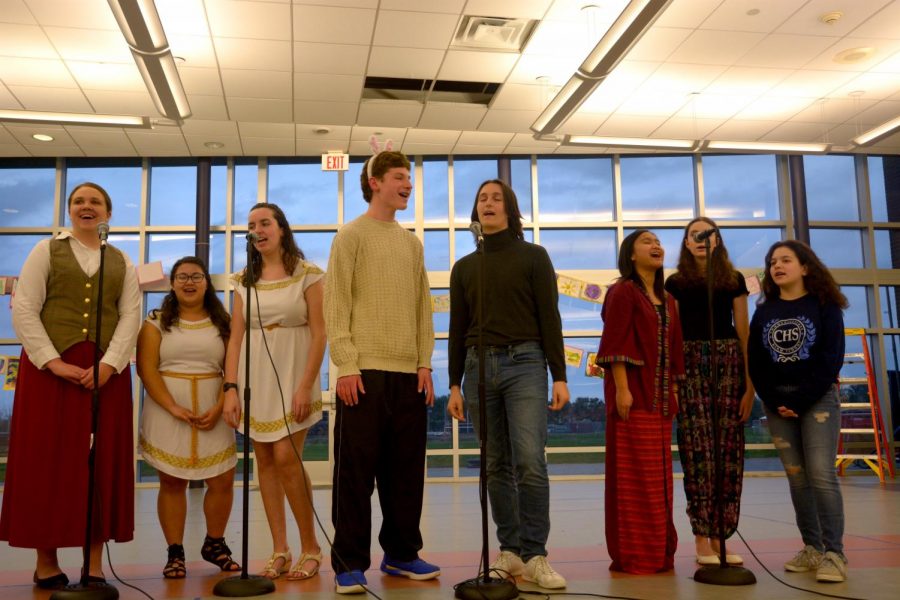 The Chorus club, comprised of students in various grade levels, performs "What a Wonderful World" by Louis Armstrong.

Students scrambled around CHS to transform the school into displays of various countries on Friday, April 14 for the 15th annual Cultural Communications Club (CCC) festival, titled “Love Without Borders.”

19 countries took part in the festival after weeks of preparation including food, art, research and games, said senior and CCC president Sydney Karlin of Matawan.

A panel of judges consisting of teachers and CCC council members assessed each country on how well they fulfilled the requirements and overall knowledge and presentation of culture from their country. Countries were required to bring in food representing their country and inform the judges on specific topics such as art, culture, language, and more. Egypt took home first prize, with England in second and Greece placing third.

The first place winners of the festival included junior Lila Nathanson of Long Branch, junior Julia Perconti of Red Bank, senior Ava Papunen of Sea Girt, and senior Cam MacConnell of Shrewsbury. They said that they started working around March.

Papunen said, “It was a lot of like buying stuff and then not doing anything for a week and then like doing a lot of work because we’re all really busy so it was like really sporadic.”

Sophomore Gianna Leccese of Colts Neck was the country leader for Ireland and said that preparation was a multi-faceted effort.

Leccese said, “We had assigned everybody a certain job to do and then everybody stuck to their part and we all collectively gathered up all the information we needed and certain people made food.”

The evening also included performances, such as poetry, singing and bagpipes. Sophomore Michael Rau of Manalapan performed “Lean On Me” by Bill Withers on piano.

“Basically I was thinking of songs I could play that… address like unity and friendship and stuff like that which is normally like the theme of the festival,” Rau said.

Karlin said there were a few problems before the day of the festival.

“We had a few issues with performances,” Karlin said. “People’s schedules started getting tight and we started losing performers and we had a few last minute performers.”

All proceeds of the festival went to St. Jude’s Children’s Hospital. Spanish teacher and CCC adviser Sabina Campbell said the event made $2,100, but fell short compared to last year,  which made over $3,000.

“I think it went really well”, said Campbell. “It was love without borders.”

“The event means so much to me because it’s not only a good night where we can raise money for St. Jude but it’s really when you see what the students in this school are capable of and seeing how much they appreciate and love other cultures and how all their hard work gets put into fruition,” Karlin said. “I think it’s just amazing to watch.”