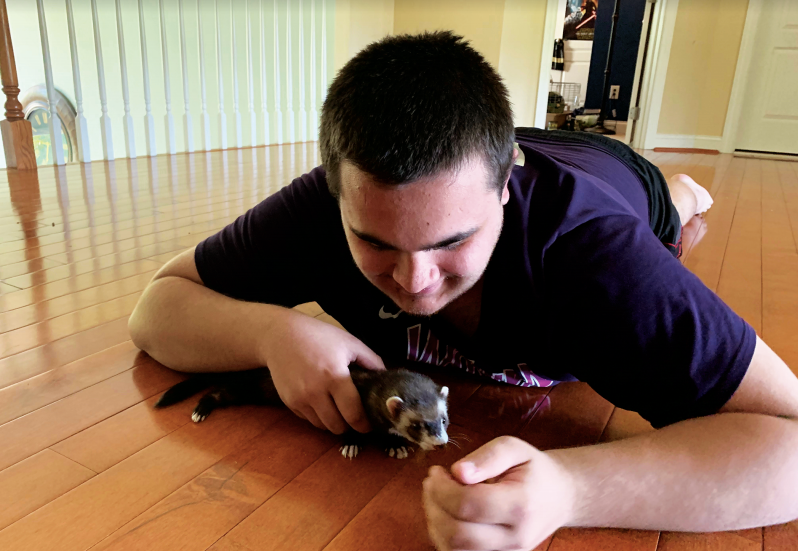 Franzen plays with his ferret Carly in his home.

Junior RJ Franzen of Allentown wanted a pet ever since he was a little kid, but couldn’t get a traditional pet because of his fur allergy. His parents surprised him one night with two pets: a hedgehog named Hedgie and a ferret named Carly, who were both a few weeks old.

“Usually, Hedgie just sits on a shirt of mine in her cage and sleeps, but she comes out when she eats,” Franzen said. “Carly is a lot more active, and she’s even figured out how to escape her own cage.”

Allergies can result in unique pets, as senior Jessica Seldner of Eatontown also found. Seldner has a bearded dragon, a scaly lizard native to Australia.

“My brother and I have wanted pets ever since we were younger, but my dad is allergic to everything with fur or feathers,” Seldner said. “We always had fish, but you could never play with them.”

Her lizard roams freely throughout her house, and enjoys interacting with her family.

“My lizard is a house lizard, and he just wanders free,” Seldner said.

Even without the fur or feathers, Burgi said that her gecko requires lots of care. She has to keep the humidity high, the temperature warm and mist Ferb’s terrarium three times a day.

“It’s a lot of work, but it’s not extremely hard to take care of. He’s a really cute and excited gecko,” Burgi said.

These pets have become parts of their owners’ families. Franzen plays with his pets nearly every day after school.