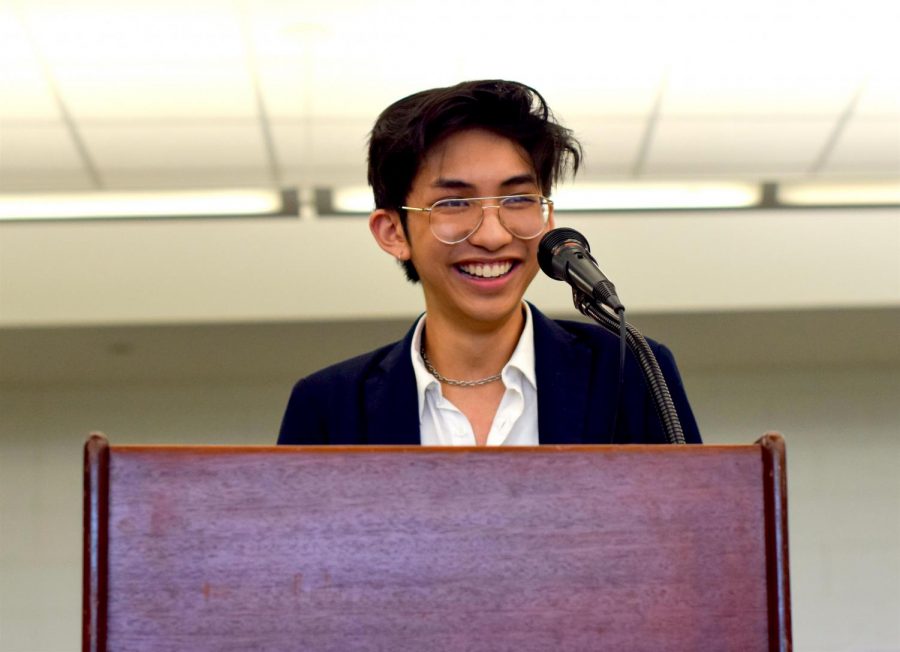 Junior Liam Jamolod of Howell gives his speech prior to the announcement of his presidency.

On Friday, May 17, CHS students gathered in the cafeteria to select their Student Government Association (SGA) council for the 2019-2020 school year, equipped with two executives and three members of council. Students elected junior Liam Jamolod of Howell as their SGA President and junior Dane Tedder of Ocean as Vice President. The council will consist of junior Evan Kuo of Tinton Falls, sophomore Georgia Trentalange of Middletown, and sophomore Brigid McCarthy of Manasquan.

Before the election, the previous SGA held Meet the Candidates on Monday, May 13. The two executive candidates and the seven council candidates had the opportunity to promote their campaign and vision for the upcoming school year. This was done through handing out baked goods, stickers, and more.

Three of the elected members will serve their second term on SGA. Tedder, who served as an SGA council member this year, learned the amount of work that goes into the organization and plans to put his all into the position of Vice President.

“As a council member, I was introduced to the caliber of work that everyone puts in to make things run smoothly,” Tedder said.  “the level of attention to detail that you need to run a successful administration is an extremely rewarding challenge that I’m willing to face head-on.”

Outgoing SGA President Liam Marshall of Sea Girt has faith in the new council and is excited to see what they achieve next year.

“I am extremely excited for the new SGA,” Marshall said. “All of them show so much potential and have already accomplished so much that I’m confident they will do such amazing things next year.”

Jamolod is pleased with the turnout of the election and cannot wait to get started.

“I am extremely excited to serve as executive and see big things coming next year,” Jamolod said.. “The 2019-2020 school year is going to be one to remember.”