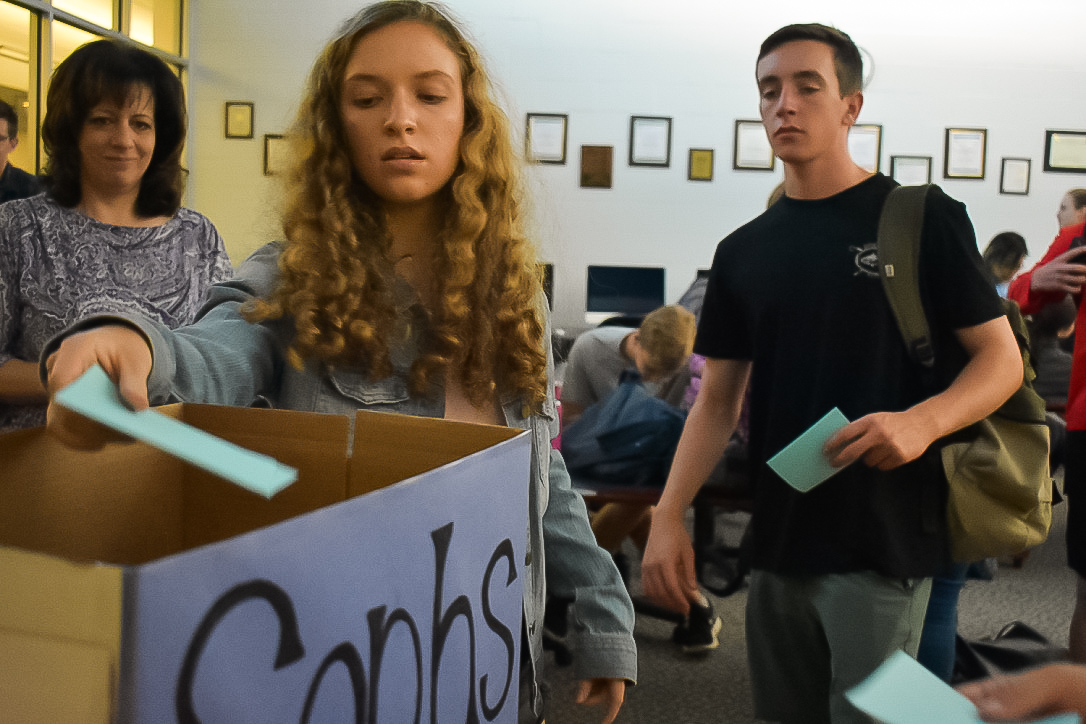 The transfer of power for clubs, as seen Photo Club’s 2019 council election, has been very hard this year, especially since most clubs were not able to meet over the 2020-2021 school year. Student are worried that the traditions and values of the clubs won’t be handed down. (BLOT PHOTO BY LEIGH LUSTIG)

The transfer of power for clubs, as seen Photo Club’s 2019 council election, has been very hard this year, especially since most clubs were not able to meet over the 2020-2021 school year. Student are worried that the traditions and values of the clubs won’t be handed down.

CHS clubs and the transfer of power

Isabella Carmona-Ramirez of Long Branch, in her junior year, accepted the position of Art Director for the CHS Drama Club and started managing publicity for The Commons, CHS’s literary magazine, all the while maintaining casual membership in other clubs like the Junior State of America (JSA) and Cultural Communications Club (CCC).

When those two weeks in March turned into a new virtual reality, things changed. She ran and was elected to the Student Government Association (SGA) as president remotely. She went to virtual meetings here and there. Now a senior, SGA is the only school extracurricular she participates in.

Over the summer before the 2020-2021 school year, members of the MCVSD Board of Education voted to limit club adviser stipends. Although CHS clubs are student-run and led, faculty advisers are necessary for safe, supervised club activity. With some official CHS clubs now missing paid advisers, they shut down for the year. According to Principal James Gleason, this decision was made under the understanding of the difficulty clubs would face meeting and interacting.

And indeed; even though some clubs remain active, a virtual setting’s lack of intimate connection leaves students unmotivated, themselves lacking energy or opportunity to participate in what would have been a stress-relieving extracurricular a year ago.

“It’s not a surprise that many students are finding it difficult to stay involved, whether it’s with clubs or regular classes, and I understand the frustration of wanting to be productive but not having the energy to,” Carmona-Ramirez said.

Still, clubs that went dark this year due to budget cuts might face this disruption for CHS generations ahead. As the 2020-2021 school year draws to a close, between dwindling participation and a shift in administrative support, graduating leaders are struggling to build clear futures for the clubs and councils they’re leaving behind.

While it may not be the trademark of CHS, clubs have long held a special place in the heart of the student body. Many were enticed to join with the promise of free food and stayed for the long haul, both for companionship and college applications. It was once not uncommon to find students wandering the halls at lunch on any given day, splitting the hour between various clubs and squeezing in time to eat in between meetings.

Fast forward, and this amiability is what many have found they miss most about CHS pre-COVID-19. Despite the excitement at the opportunity to return to the building, students are quieter and more reserved, finding it difficult to maintain bonds with peers that they are only in the same room with three days out of the week—if that. There is a lingering feeling that things are still not quite right, despite the effort the school has put in to compensate for this lack of normalcy.

“It’s definitely been weird being on club councils right now without being able to meet,” said senior Steve Ostrom of Lincroft. He had assumed the roles of president of the Drama Club, Editor-in-Chief of The Commons, and co-president of SkillsUSA/NTHS, but his participation as a council member was halted as SkillsUSA was suddenly the only club of the three left able to actively meet.

“Our advisors are really doing everything that they can to help us out, but even then there comes a breaking point of what’s possible given our circumstances and restrictions,” Ostrom said.

Joining the ranks of The Commons and Drama Club, other clubs that took a “silent hiatus” this year (as senior Meagan Ellis of Freehold called it) include CCC, Digital Video (DV) Club, Chorus Club, Music Club and Photo Club.

“There was only so much we could do,” Carmona- Ramirez said. “We didn’t gain much momentum when the idea of a virtual show was proposed, and Lit Mag was stopped from the beginning.”

“For CCC, being on council has unfortunately meant nothing beyond my college app,” said senior Erin Burke of Allentown, a CCC council member. “We have not talked as a council since the summer and it’s really sad because all of our work was in-person based.”

A cut in adviser stipends meant that previously “official” CHS clubs, clubs that receive financial support from MCVSD administration like CCC, Drama Club, and Lit Mag, stopped all activity completely. “Unofficial” CHS clubs, like JSA and WCHS/Radio Club, have never had to rely on outside finance to keep their clubs going, instead operating via independent fundraising.

These unofficial clubs that were able to continue meeting this year, a cohort that also includes Tech Club and Chess Club, faced a new kind of challenge.

“There was no way anyone could have predicted what JSA was supposed to do if a global pandemic
struck. We were forced to rethink the entirety of the club in order to make it run successfully,” said Hannah Schwartzberg, co-president of JSA.

A lack of underclassmen involvement and shrinking attendance to virtual meetings are some of the problems JSA, and many other clubs, have encountered. Schwartzberg, co-president as only a junior, is ready to give JSA another year of leadership, even as challenges continue.

“The biggest challenge we faced this year was participation,” said co-president of Skills, senior Danielle Hannah of Middletown. “A lot of people join SkillsUSA so that they’ll qualify for NTHS, but I think this year a lot of juniors and seniors simply didn’t feel motivated to apply to NTHS because they weren’t in school seeing and hearing us talk about it.”

After a hard year, clubs are looking ahead. Now armed with the knowledge of what worked in the virtual setting and what didn’t, they are preparing to face the uncertainty of the CHS student activity landscape in the upcoming school year, starting with the task of electing a new council.

Tech Club was new to the “unofficial club” lineup last year, getting its start mere months before the pandemic forced their meetings to resume online or risk disappearing. Fortunately, the club has managed to stay above water for over a year and recently elected a new council, ensuring its survival for the time being.

Sophomore Luke Chrzan of Middletown was elected the new Event Coordinator over Google Meet, and now finds himself in charge of scheduling meetings for the club without a clear idea of how meetings will work in the next year.

“I’ve already planned to simply host meetings online and partake in some different activities with Tech Club so we’re able to still meet and have fun online,” said Chrzan. “I am extremely confident the new council of Tech Club can keep the club running. We’re all filled with great ideas and are ready to work around any issue.”

Similarly, Radio Club elected their council virtually the previous year and senior Meagan Ellis of Freehold, the WCHS General Manager, plans to follow the same format this year to fill in the positions of graduating council members.

“Our Communications Director and both Junior Council members are the people on council that aren’t graduating this year,” said Ellis. “After getting to know them this year and seeing the potential they have on council next year, I’m very confident that WCHS is in very good hands.”

As Principal Gleason reflects on the board decision a little less than a year later, he remains confident.

“I don’t think it’s anything we wanted to do but I think it was necessary,” he said. “I think that the decisions that we made at the beginning of the school year were good ones.”

Gleason reflected on club effects on social-emotional learning while also noting pandemic-era health restrictions, saying that he sincerely hopes this year is a standalone year of inactivity.

Even just one year of disruption might have longer-lasting effects. Clubs at CHS are student-run, making leadership not an innate quality but some sort of mystical passed-down knowledge. A lack of underclassmen participation paired with seniors graduating with one less year of club experience could mean a years-long club recovery period, or a complete reinvention of the CHS club wheel.

Despite lingering uncertainty, graduating club leaders are optimistic: club participation is the epicenter of CHS culture and “a very important component of student growth” according to Gleason, and many seniors have made their best friends and memories at club meetings. As bittersweet as it is to not get closure, Carmona-Ramirez has hope for the next few years.

“For the past four years, my peers and I offered our blood, sweat, and tears to the extracurriculars of CHS. Some of our best memories with each other were made while working on set, staying after school, spending our lunches working together,” Carmona-Ramirez said. “Many underclassmen weren’t able to experience CHS’s clubs in the same way I did during my first two years but hopefully will in the near future.”

The Inkblot • Copyright 2023 • FLEX WordPress Theme by SNO • Log in